The following understandable players guide discuss in depth about badminton smash, its varying types and techniques to be followed for a beginners to expert level badminton playing.

Smash shot! as apparent as the words is!

What is Smash Shot?

A shot that is played with powerful hit with fast and aggressive posture. The hitter need to have stronger grip, an ideal posture and seizing opportunity to hit the smash shot back straight towards the opponent

In simple terms, an offensive and powerful shot that is played from the rear of the court, travels downwards and lands swiftly on the opposite side of the court. 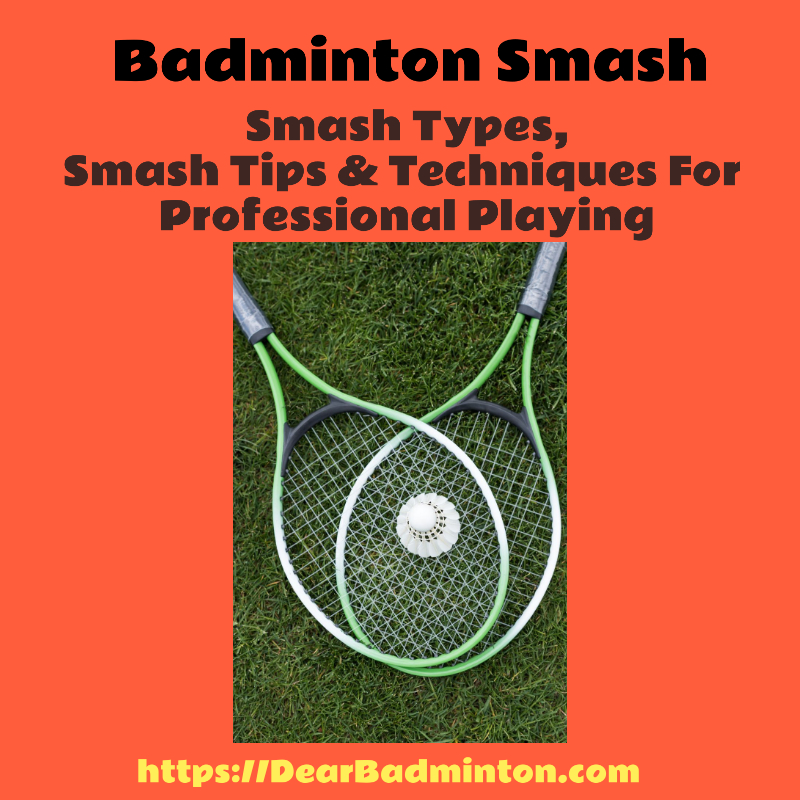 In all racket sports like badminton, squash and tennis, smash is a common shot, played with some uncommon trick and strategies

How to hit Smash Shot?

The smash shot is not a common type of badminton shot. So as, it requires firm grip, enough strength, proper trajectory, opportune time and straight direction to help you win a point by deceiving your opponent in an instant.

The smash shot is not only difficult to play but also difficult to defend. The difficulty of hitting and tackling this shot lies in the force it demands and the pace it acquires.

Moreover, this shot is often played from higher to lower trajectory that makes it more difficult to cope with.

In fact, the smash shot is both decisive and productive for the players. You can use it for either defense or offense; however, it is often used as an offensive shot to beat the opponent and win a point for you.

What is Badminton Smash Grip?

The smash grip in all refers to how firmly you hold the racket in your grips making it ideally prepared for your desired powerful smash shot.

How to Grip while hitting Smash Shots?

We cannot overlook the importance of grip of racket while playing badminton. The grip is undoubtedly a significant aspect of badminton be it smash, forehand, backhand, overhand, lob shot or even normal serve.

However, the role of grip increases multi-fold when it comes to hitting smash shots.

A player with inappropriate or loose grip cannot exert needed power on the smash shots and cannot send the shuttle towards desired directions.

On the contrary, the player with accurate and firm grip can exert sufficient force on his/her smash shots and can send the shuttle towards desired directions.

Let’s now find out the ways to grip the racket for hitting accurate and powerful smash shots.

First of all, take your dominant hand forward and hold it before you as if you were to shake hands with someone.

Now, locate the V shape that lies between index finger and thumb. If you are right handed, go for right hand and if left-handed, hold the left hand.

Take the racket before you; hold its handle after placing your hand on the stringed-face and sliding your hand down to the handle until it reaches the grip part of the handle.

Note: You should hold the face of the racket sideways, around at 10 degrees.

As you hold the racket sideways, make sure that the handle is placed between V shape and your thumb is put in between your middle and index fingers.

In order to verify whether your racket is gripped accurately or not, you should play some shadow smashes.

Your grip is appropriate if you are able to move the racket comfortably and your racket is facing the shuttle forward.

Without practice one cannot acquire mastery over anything. In fact, practice is what makes a person perfect in his/her field.

The same proverb befittingly applies on the mastery of smash shots. If anyone wants to make his smash shot flawless, he has to go through rigorous practice.

Smash being one of the demanding and difficult shots to play requires drills and exercises to master it.

Don’t worry; we will assist you master smash shot with the help of following drills.

Let’s find out some of the most useful drills for smash shots:

Straight smash is a common shot that players often hit while on the offense. This shot, as its name explains, is hit straight to the opponent with the view to deceiving him/her at once.

Let’s now see how to practice this shot.

This drill is all about lifting and smashing. In this drill, one player feeds the lifts and the other hits the smashes.

(two opponents against one player)

This drill will improve your attacking, defending and smashing abilities simultaneously.

In this drill, one player faces two opponents so as to experience tough competition. The opponents can occupy two different positions; either they can stand side by side to each other or they can go for front and back positions.

This drill is the most demanding of all the three drills. This drill needs three players where one player faces two opponents.

Here the standing positions of opponents such as side by side or back and front are very crucial.

a). Side by Side Positions

In case of side by side position of opponents, the single player has great opportunity to practice smash shots.

It means that the single player is on the offense. On the contrary, the pair of opponents can only rely on lifts, blocks and clears. Thus, the pair or doubles are on the defense.

b). Front and back Positions:

In such situation, the shot selection of single player is limited to blocks, clears and lifts. It means he is now on the defense.

However, you can shift positions so that each player may get equal opportunity to practice smash shots.

Following are the important types of Smashes in Badminton. They are;

Backhand smash is a smash in real sense. This shot is played with backhand grip and full follow-through of the racket holding arm; it generates sheer power in the shot and makes the shuttle travel from one half of the court to the other in not time.

Whether you are a professional or an amateur badminton player, backhand smash requires proper grip, enough force, appropriate execution and accuracy of position.

Generally, all the smash shots are attempted in the rear of the court, however, it is recommended not to attempt this shot from the baseline because it will neither create needed power nor speed up the recovery time.

In order to hit a forceful backhand smash, it is recommended to attempt the backhand smash when you are in the mid portion of your court.

When you played this shot as suggested, you are sure to beat your opponent and get a point.

Jump smash is a smash that is attempted from the air so as to generate more power and downward angle.

Jump smash is not as easy as it looks; it is way more risky to execute and synchronize with the shuttle.

Jump smash, if played incorrectly, may lead to misfire; the racket may miss the shuttle as you miss to jump or hit the shuttle concurrently.

Succinctly, jump smash is all about timely synchronization of jump, shot and shuttle.

Therefore, it is advised to practice the jump smash first and then attempt this shot. In case you master this shot, you will become a tough contender for your opponents.

3. Defense of Smash Shot in Badminton

In badminton, being offensive earns you points while being defensive saves you from costing easy points.

Thus, offense and defense have equal importance in badminton. So, one should not rely on being offensive all the times rather one should have phenomenal defensive skills too.

Defending other shots is not as difficult as smash shots are. The smash shots, due to their sheer speed, offer less time to react and eventually defend them.

So, one has to be extra alert while dealing with smash shots of opponents.

What is most advisable is that a player has to be extra vigilant and stand in a way that his body faces his opponents.

Moreover, he should adapt defensive stance and move from right to left and from left to right so as to cover both sides of his court.

If he chooses this method, he can block the smash shots hit by his opponent.

To conclude, we would say that the smash shot is highly productive when it comes to grabbing points.

In fact, this shot is not easy to play due to its being highly forceful and demanding in nature.

Nevertheless, one can master it with utter dedication and consistent practice.

Once you have mastered smash shot, you will literally become invincible to say the least.

Any cookies that may not be particularly necessary for the website to function and is used specifically to collect user personal data via analytics, ads, other embedded contents are termed as non-necessary cookies. It is mandatory to procure user consent prior to running these cookies on your website.