Badminton is a well organized sport. It has detailed Rules For Faults, Fouls or lets  when any player violates its rules.

Let’s discuss in detail, major faults in badminton, penalties and ways how a player can avoid them.

Here! before we head start ahead, let’s know about the Fault or Lets in badminton.

What is Badminton Fault?

Whenever a player deviates or break any predefined rule of badminton, intentionally or unintentionally, while on the court, he is said to have committed a fault. There upon, he is liable to get penalized instantly on the court.

In fact, the violation of well defined rules can ruin the efforts of players. Therefore, it is pretty much better to avoid committing faults (violations of rules) and keep the spirit of the game intact. 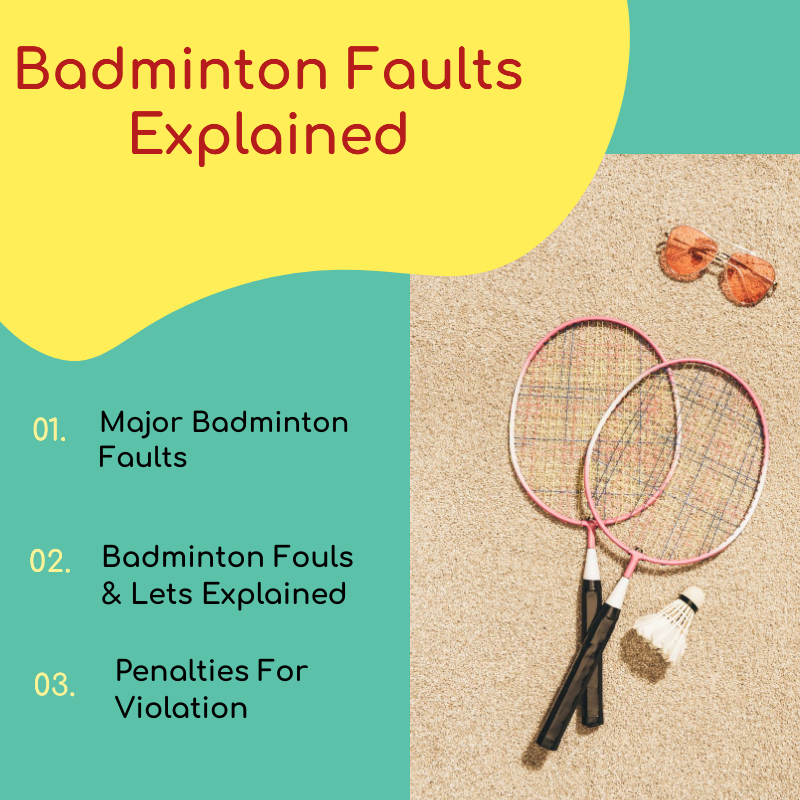 Types of Faults in Badminton

Here, these are the 5 major types of Faults in Badminton. They are;

Service is the first shot that a player plays after winning the toss. When a player (the server), while serving to his/her opponents, commits certain faults, he is said to have committed service faults.

Let’s now have a brief look at those faults:

The server is considered to have committed a fault if:

When a player, who is standing on the opposite side of the server, makes a mistake, it is said to be the fault of receiver.

Similar to the server, the receiver can also be penalized if he/she violates the laws of the game.

Let’s now see when the receiver falls prey to faults:

Note: The receiver can move as soon as the shuttle is served from opposite side.

However, you are not penalized, when you attempt to hit the shuttle and it touches your racket on two positions during a single stroke. In nutshell, two strokes are not allowed in badminton.

4. Over the Net Fault

This fault is about making contact between your racket and the net during a rally. Generally, this fault takes place when you attempt to hit the shuttle that is about to cross the net, but end up touching the net with your racket.

Note: You are permitted to hit the shuttle over the net but you cannot come in contact with the net while executing the shot.

Flick is one of the types of service shots which the server uses to beat his opponent. The flick serve sometimes goes wrong and costs dearly to the server.

1. When the height of serve becomes issue:

2. When the direction of the racket causes an issue:

Holding the racket firm and maintaining proper direction is the key to play a perfect flick serve.

At times the direction of your racket and shuttle goes astray which is not allowed during the serve. However, you can play flick shot with more freedom during the rally.

What is a let in badminton?

A let results from an unintended fault of players that can be exempted of any penalty by the umpire.

Whenever a let occurs, it simply stops the rally and is replayed by the player that has committed the mistake. In nutshell, a let doesn’t impact points or score.

Let’s now have a look at the most common lets in a badminton game. It is a let when:

1. What is carrying foul in badminton?

Carrying foul occurs on rare occasions. However, it is important to know what it actually is. On the face of it a carrying foul looks like a double hit but it is different from double hit.

A double hit means when a player hits the shuttle with the racket, the shuttle receives two hits in one stroke. Moreover, the racket doesn’t catch or hold the shuttle.

A carrying foul means when a player hits the shuttle with the racket, the shuttle gets caught or held by the racket and then it is slung while executing the stroke. In nutshell, there needs to be three things for a shot to be called as a carrying foul:

2. Is it legal to Serve overhand in Badminton?

No, it is not legal to serve overhand in badminton. As per the rules of service, the server has to serve the shuttle by taking it downward and also taking the racket below the waist level.

3. Can the receiver move during the serve in badminton?

No, the receiver cannot move during the serve in badminton. As per rules, the receiver has to abide by the following instructions:

Badminton has the strict rules for game violations, as you read here. For a detailed Playing badminton rules, you may read our previous posts for a professional Badminton Playing

Any cookies that may not be particularly necessary for the website to function and is used specifically to collect user personal data via analytics, ads, other embedded contents are termed as non-necessary cookies. It is mandatory to procure user consent prior to running these cookies on your website.